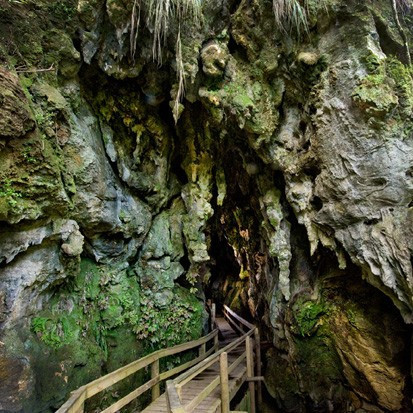 The Waiomio Glowworm Caves (formerly Kawiti Caves) were discovered in the early 17th century by Roku. Hineamaru, famous cheiftainess of the Ngati hine Tribe arrived at Waiomio with her aged father, Torongare and her brothers.


Exploring the valley, she discovered trodden Tawa berries which made her curious. No member of her party had come this way. Later she smelt smoke which seemed to come from a nearby hill. She went forward and found that the smoke was coming from a cave. 20 metres in from the entrance she came upon a woman sitting by a fire. Hineamaru learned that she was Roku, runaway wife of Haumoewarangi of the Tribe Ngatitu.


Today, the Waiomio Glowworm Caves are owned and operated by the Kawiti Family, direct descendants of the chieftaness Hineamaru of the Ngati Hine Tribe.