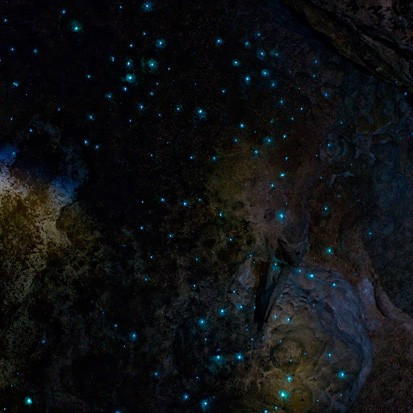 The Waiomio Glowworm Caves are owned and operated by the Kawiti family.

Your guided tour will follow a wooden boardwalk through a 200 metre limestone cave system. Once inside, you will see thousands of glow worms spread across the ceiling surrounded by breathtaking stalactites and stalagmites.

As you enjoy the galaxies of glow worms above, your friendly guide will explain the life cycle of the New Zealand Glow worm (Arachnocampa Luminosa) and the intricate webs used to catch their prey. You’ll even get close enough to see the actual body of the glow worm and its stunning blue/green tail light, before you make the return bushwalk through a natural corridor of karst rock formations and pristine rainforest.

CAVE DETAILS
The caves are 200 metres in length
Handrails and wooden walkways through the cave and most of the bushwalk track over the hill, returning to the car park.

ADDITIONAL INFORMATION
Sensible flat walking shoes and a light jacket are recommended.
There is no pushchair or wheelchair access.
No photography or video recording inside the caves
Good vehicle access and parking